So, I have been involved in short term mission work, much like our annual pilgrimage to Navajoland, since I was 14-years-old.  My very first mission experience was to build a home for a homeless family in Tijuana, Mexico with the youth group I participated in growing up.  And over the last 30 plus years of this sort of meaningful work, traveling almost every summer over those 3 decades in the US and Latin America, my understanding of what we actually go to do and experience has evolved, as I myself have matured.  Over time, I have come to see my own participation in this sort of ministry not so much as an act of self-less service, though there are aspects of self-giving and meaningful help offered on these sorts of trips.  And, I certainly no longer primarily perceive such trips as going to bring light into the darkness or to save another person, or perhaps less dramatically, going to help or improve another person or persons lives, though I do believe the good, hard work that I have shared in has been a blessing to others.  Instead, I see such experiences…as going to turn on the lights in my own life…to be saved myself.  And, in terms of my own experience on such mission trips or pilgrimages with a service component, like our trip to Navajoland, I think saying I go to be saved myself is not overly dramatic.

For, now, I travel first and foremost to be shaped and to learn from those I get to serve alongside…both those I travel with and those we go to be with…to recognize in the poverty I have experienced the ways I have lived an impoverished life…not in a material sense…but in a spiritual sense.  For in the joy and wisdom I have discovered in the Godly lives of those living very differently than myself, I have been made profoundly aware of the ways that I have placed my own well-being ahead of the needs of others…the ways I have looked for joy and my own sense of security in things like a bank account, rather than, in the relationships I have with those who I am blessed to love and share a life with and, of course, in our God, who is our ultimate provider and sustainer…both in this life and in the forever life to come. I have begun to see those I go to stand with, not over, but alongside and with…like our Navajo friends…more as a mirror than an object existing separate from me.  A mirror reflecting back at me my own humanity…reflecting back at me my own wounds and short comings…reflecting back at me my own selfishness and enslavement to a western idea of success…and also…reflecting back at me my own beauty…my own ability to feel what another is feeling, what we call empathy…my own ability to connect meaningfully with those who look, live and love differently than I do…my own ability to give myself more and more over to the God of love.

My experience is that, whether at home or abroad, if I am willing to break free from being overly focused on my own goals and ambitions, step out of the lane that I am determinedly trudging along, to stop…just for a moment and see…really see the people around me…most especially those who might be inviting me to engage with them…whether out of friendship or because they genuinely need me…when I am willing to disrupt my life for just a moment…whether walking down my own street or by traveling to some place like Navajoland for just a few days…I get…we get…to see reflected in the real lives of those who surround us something as beautiful and important as everything that is made…humans…us and them…both beautiful and broken…God-shaped and a work in progress.  As two people really see each other…really listen to each other’s stories…both the triumphs and travails…our shared humanity is affirmed…our capacity for God-like love is made manifest…the work still left to be done in us is acknowledged.  At our best, we get to be soul mirrors…one for another.  And hopefully nothing will be the same for either of us…whether offering or receiving care…for, at times, we all find ourselves in both of those positions.

And this is both the tragedy and promise of what Jesus is describing to us in today’s familiar parable of the Good Samaritan.  At first glance, we may rightly see the two religious men who walk by the wounded person, leaving him half-dead on the side of the road, as the bad guys in the story.  And, indeed, their choice is rightly described as cruel and selfish…certainly not neighborly. But I think the neglect could equally be described for all involved as a tragedy.  The two religious leaders are so wholly focused on getting where they are going…the next item on their to do list…the religious duties that must be offered at their destination…that they cannot break free from the lane that they are determinedly trudging along…all internally chained up by their own goals and ambitions.  And this leads to rendering the person in need entirely invisible.  A tragedy of epic proportions.  First and foremost, for the one made invisible who is left to suffer and perhaps die alone.  But, in addition to that, the two religious men, who won’t deviate from their predetermined path, are also profoundly diminished…their souls are impoverished and, on the inside, they die a little bit more…they have made themselves a little less relevant to God’s work in the world.  For they walk right by their own opportunity to see in the wounded man something of themselves…the good they are capable of…the loving care they can manifest.  They miss the opportunity to reflect more perfectly in their own lives the One in whose image they are created.  They miss out on the chance to recognize in the wounds of the other their own wounds that they carry around in their own souls…for that is the very place from which growth is made possible.  They miss the chance to have their own humanity entirely affirmed, as it is reflected back to them in the grateful eyes of another.  And I think all of that is tragic…really tragic

And, yet, Jesus’ story also provides promise…for another sort of ending is set before us…another example is given.  The story does not end with the man in desperate need left to die alone on the side of the road.  Instead, the one we have come to know as the Good Samaritan…stops…he sees the man in need and he goes to him.  He leaves the lane he is determinedly trudging along…even if it assumes some real personal risk.  He sets aside his own goals and ambitions.  He sets aside his own to do list…to see…really see both the humanity and real need of the one who is injured…and the story of tragedy begins to be redeemed…a resurrection of sorts begins to emerge.  As I said way back on Easter Sunday…the song bird’s lovely tune begins to be heard in the very midst of the tomb stones.  And I believe that maybe more than just one life is saved that day.  First and foremost, or course, the life of the man left by the robbers half-dead on the side of the road is saved…but the Samaritan’s as well.  For he is given the chance to see reflected back at himself in the face of the injured man both his own needs and wounds, such that he can continue to grow and become the person God has created him to be…and see what he is really capable of becoming…the possibility of living a courageous life…being an empathetic manifestation or God’s own healing work in our world…God’s life alive in his own heart and bones…two lives saved…human tragedy redeemed.

On the screen is a mosaic created by a local high school student that is on a wall at El Buen Samritano Episcopal Mission in south Austin…a mission that belongs to all of us Episcopalians in the Diocese if Texas that serves the working poor, with a focus on Latino populations, in our community.  And the mosaic is an image of the Good Samaritan caring for the wounded man on the side of the road…an artistic rendering of the living mission of El Buen Samaritano…a mission to stop and see those suffering in our larger community, in particular those who are immigrants among us, and to stand with them, not over them, but alongside and with them…recognizing that our collective salvation…truly becoming the people that God has created us to be…is all tied up in each other…in our willingness to see and serve each other.  For God’s kingdom is made present…God’s love is made manifest and known…our humanity is affirmed and our meaning is made…when we begin to really see each other.

It is a little hard to tell on the screen…but the faces of both men are actually mirrors.  The background and bodies in the mosaic are made up of multi-colored tiles…but the faces are mirrors.  And, I believe the point is whether we are the one being offered care or the one offering care…both of us find something of who we really are reflected back to us in the other…in the very moment we really see each other…in the moment we stop long enough to make a connection…for we all have a gift to give each other…we all have something to learn from each other…we are each other’s healers and keepers and caregivers…whether we are the one giving or the one receiving the care. For in so many ways we are really always both.  What makes the image both beautiful and powerful is the love exchanged between the two…God’s own love.  It is the two connected together that points to redemption…that points to Easter…they are saving each other…only together are they whole and the image made complete. Thus, our salvation lies in part in each other, for God’s love that makes us whole and fully alive, dwells most gloriously in the moment when two human hearts connect…when we see God’s imprint on our own lives reflected back to us in the face of another.  A human tragedy is transformed into the promise that we can all flourish…but only together…only as God’s love connects us one to another.

So, who do you need to see…really see…whose soul mirror do we need to peer into.  Maybe it is someone we are close to at home, who we have been ignoring as we trudge along stuck in our own lane.  Maybe it’s someone some distance away living on the margins in our larger community…on the many borders we erect in our world. Maybe we need to find a place like El Buen Samaritano or Casa Marienella or Out Youth to connect heart to heart with those who look, live and love differently than we do.  Maybe we need to sign up for next June’s Navajoland Pilgrimage right now.  Or, maybe we just need to pay greater attention to the people around us as we simply walk through the places and experiences that make up our own life.  There are people all around us who need us to see them…who crave our friendship or genuinely and desperately need our assistance.  And, in doing so, as we see our own selves reflected back in their faces, as we experience God’s love in the human connections that we forge, we are likely to find…that we ourselves are among those who are being saved.  Amen. 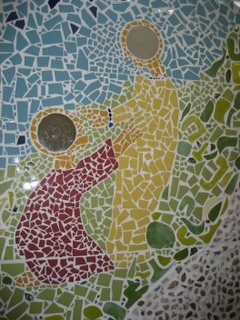